skip to main | skip to sidebar

The Boil, The Transfer, and The Pitch

The remaining part of the boiling process went smoothly.  We added the flavoring hops at 45 mins and the aroma hops at 5 mins; once it was done, we transferred the pot to the sink, where we had an upside-down 9" cake pan sitting (for pot stability) in ice.  And then we tried to get the dang thing to cool quickly.  If you consider 40 minutes quick, then we succeeded.  I think that next time we brew, we will invest our loose-change savings in a wort chiller. 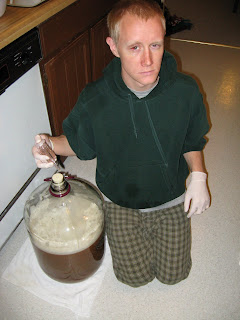 This time, instead of pouring the pot into the carboy, we siphoned the wort from the pot.  This
took about 15 minutes, but it was worth it, as we avoided a lot of solid matter.  I think this will help with the beer flavor.  AND Darren took a specific gravity reading while I held the siphon. He read:
SG = 1.058 at 73 F.
By the way, if we do this again in a one-step fermentation (like we are doing now) and use a
siphon to transfer, we will want to start transferring the wort at about 100 F, beacuse it t
akes so long to transfer that it cools substantially on the way.  Darren read 73 F during the transfer (though it was probably a cool reading, since the remaining wort in the pot probably cooled rapidly in the ice bath), and we still had a gallon of cooling water to add. I'm sure it went okay though, since I just read 72
F on the carboy in the closet.
The siphoning process seemed like it added quite a bit of air to the wort, which is good for the yeast.  Still, once the wort was transferred, Darren pitched the yeast and gave the carboy a good shake to add more air.  We then capped the carboy with a bung and the one-way bubbler air-release thing (not sure what its technical name is).  It now sits happily in the Harry Potter closet.
We, and the brew-kittens, await sounds of bubbling, active yeast. 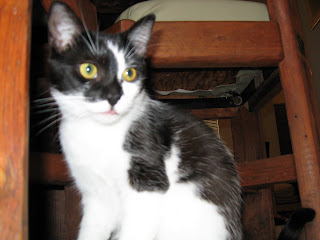 P.S. The pictures are not leftovers from last time 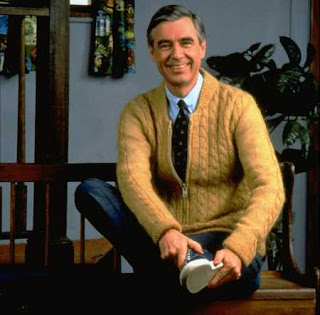 I was just looking at the blog from the previous brew day, and I noticed that Darren is wearing the same shirt.  Ha!  Though it may look like it, the pictures that I'm posting today are new and fresh from today, and are not leftovers from last time.
And in case you're wondering, no, Darren does not have a closet full of the same outfit like Mr. Rogers.
Posted by Travis at 4:28 PM No comments: 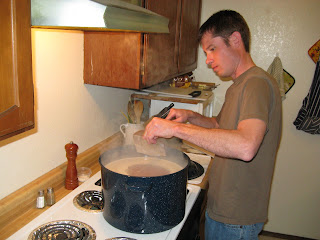 the grain sack.  Darren opened the sack, and we poured cold water (~0.5 gal) through the sack into the pot to remove the last bit of malty goodness (and Darren squeezed it).  We brought the pot to a boil, then removed from heat, and added the malt extract.  I used the toothpaste trick of rolling the package to get as much malt out as possible.  Darren stirred, and then resumed heating until the pot was at a rolling boil.
He added the bittering hops, whice began the hour boil.  As a note for t
he future, once the pot is at a rolling boil, do not put the lid back on.  Darren and I stepped out of the kitc
hen
briefly after having done this (to let it achie 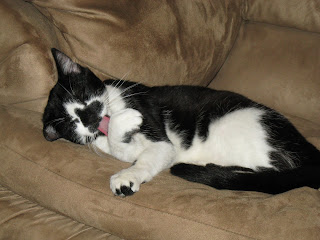 ve a heavy boil), and it boiled over in the mean time.  The Morning Glory Company's guide did warn against this, so I'm adding my warning too, for posterity.  We lost a bit of hops from this, and Darren had to remove the pot from the burner to clean up briefly so that we didn't flood the house with the smell of burnt hops and grains.
All is well though, and the pot is boiling, and the b
rew kittens are santizing themselves to help with transferring the brew to the carboy.
Posted by Travis at 4:12 PM No comments: 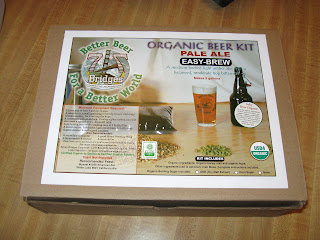 mebrew.  We figured that we would try to brew this one before we move, since it will likely be too hot to brew beer in Davis during the summer (though in the fall, we plan to bring the kit to my parent's house to have a lager making brew contest [everybody wins!]).  Instead of getting raw ingredients to re-make the Sierra Pale Ale, the lady at the co-op convinced
us to go with one of their pre-made kits.  Darren and I agreed that this was a good choice, since the recipe from the Sierra Pale Ale didn't include exact quantites, and we didn't record those last time.  The kit that we picked up, the Organic Pale Ale, had just been assembled a few days before, so freshness is on our side!
The kit includes:
7 lbs Briess Pale Malt Extract
0.5 lbs Briess Caramel 20 ^oL Malt
0.5 oz Belgian Challenger Hops (pellets) -- bittering
0.5 oz New Zealand Cascade Hops (pellets) -- flavor
0.5 oz New Zealand Hallertaur Hops (pellets) -- aroma
0.5 tsp Irish Moss --takes the place of whirlflock tablet; is apparently main ingredient
1 Vial White Labs WLP001 California Ale Yeast
Step-by-step instruction pamphlet
Complementary "Illustrated Guide to Brewing Organic Beer Kits" pamphlet 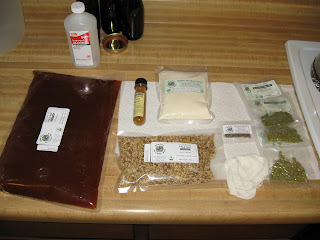 We also bought 60 #BE9 bottle caps for the bottling process later.
Today, we are brewing the beer in this kit.  I am playing the role of overseer and record-taker, since I am feeling under the weather today.  Fortunately for us, Darren has all but finished his PhD dissertation and the talk for his defense, so he has minimal work to do at the moment--he did a bit of lab work this morning, and then came home for lunch to start this process.  After lunch, Darren meticulously sanitized all of the brewing equipment in our bucket with a water/iodine mixture.  The glass carboy is scrubbed clean, and is presently soaking in sanitizer out side.
Step #1 of the step-by-step instructions tells us to soak the grains in hot water for 15-20 minutes, below 180 F.  However, we are modifiying this step and following the instructions of last time, which is supposed to maximize sugar and malt release: heat to 155 F, turn off heat and let sit for 20 mins with lid on.  Darren placed the grains in the cheesecloth sack from last time so that we can easily strain it once they've soaked.  I'll write more as we proceed.
The brew kittens (who are hardly kittens anymore) are non-plussed. 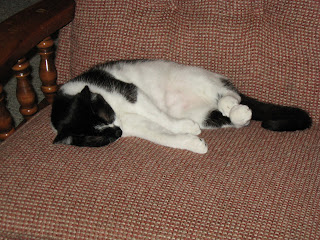 Posted by Travis at 2:47 PM No comments: 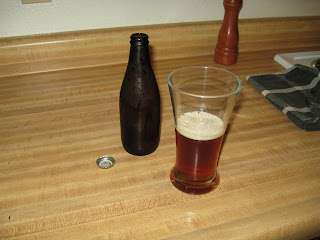 It has been one week since we bottled the beer, so they should be carbonated by now, though we're going to let them sit for a while longer, since their flavor is supposed to 'mature' over the next couple weeks (I have no idea what that means, but as long as it tastes good, I'm happy!).  However, Darren pulled out two of them for us to test this week, so that we can see how it turned out and so that we can get an idea of how the flavor changes over the next few weeks.  We split the bottle between the two of us.  It was nicely carbonated, and we were able to give a nice head to Darren's glass.
It was delicious, in my opinion.  Quite hoppy, but not so much that I puckered, and it had a slightly sweet taste.  It reminds me a bit of Red Hook, but sweeter.  It has a nice amber color, a bit of a bite, and a good aftertaste.  All in all, I consider this a good beer--one that I would pay $7/6-pack in a store.  We are pleased. :)
Posted by Travis at 7:29 PM No comments: 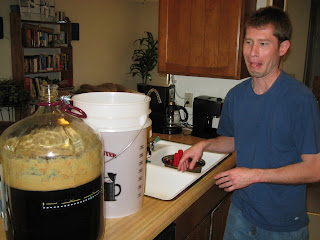 After several weeks of letting the beer ferment on its own--a few weeks longer than we originally intended--we bottled our beer today.

Over the last few weeks, we have added to our collection of dark brown bottles--we found that Pacifico bottles are incredibly easy to clean. The label comes of nicely and the glue scrubs away after just 5-10 minutes of soaking in a solution of Oxyclean in the kitchen sink. In the end, we collected 43 bottles, which turned out to be the perfect number (good estimating eyes!). First thing this morning, I put all the bottles I could fit, 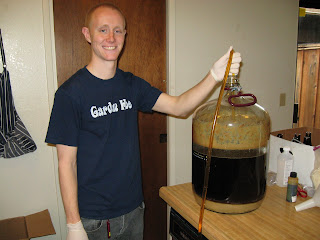 37, into the dishwasher and ran it to give them all a final cleaning. Darren gave a final wash to the others by hand.

We took the fermenting bucket and filled it 3/4 full of water and added a full tablespoon of iodofor. We soaked all of the bottling equipment in it, and soaked each bottle fully for several minutes. This turned out to be quite time consuming, but well worth the effort since we want to brew beer, not bacteria.

Once all was clean, we emptied and rinsed the fermenting bucket and put it on the ground for siphoning. We put the glass carboy up on the counter, and filled the (already-clean) siphoning tubes with water. We then put the tube into the middle of the carboy, let the water drain into a bowl, and then let the rest release into the bucket. We were able to avoid about two i 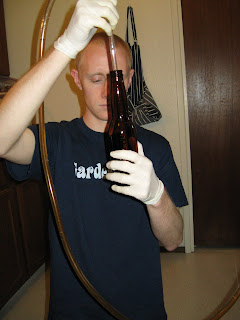 nches of yeasty, hoppy sediment at the bottom of the carboy this way.

We then attached the siphon-tubing to the spigot on the fermenter bucket, and began the (satisfying, yet tedious) process of filling the beer bottles with beer. I did filling, and Darren did the capping. It was a bit nerve-racking to watch him, since he had to put so much pressure to get the capping mechanism to go down. I was afraid that one of the bottles would explode in a tragic mess of glass and beer. (By the way, the beer smelled amazing at this point--so far so good for being clean in the whole process). All in all though, the whole process went smoothly, and now the bottles are all sitting, carbonating, in our Harry Potter closet. The taste test of the beer was successful as well. Mmmmmm.

While Darren cleaned up in the kitchen, I took the carboy out on to the patio and cycled water, soap, and a scrubber through it. After two trips to the kitchen sink I had emptied out almost all of the yeasty material from the carboy. I gave it one last scrub with soap outside, and then flushed water 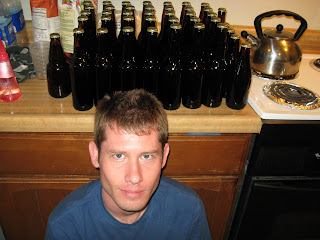 through until it was rinsed clean. I gave it one final fill with a bit of chlorine bleach to make sure that it doesn't get musty while it waits in the closet until the next brew.

I realized after all this, that since it takes most of a day anyway, it might not be a bad idea to make it a full day and start a new batch of beer after bottling the old beer. We have a sanitary kitchen at this point, all of the cleaning equipment out, and a freshly cleaned carboy. It wouldn't be much of a stretch to add a few hours to get a new batch of beer brewing. Maybe when we order new brewing ingredients in the near future--we still have yet to decide what kind to brew--we'll order two sets of ingredients. :) We're going to make an efficient enterprise of this. 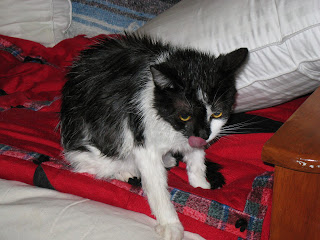 And we gave the brew kittens a lesson in cleanliness too. I'm sure they'll thank us later.
Posted by Travis at 7:09 PM No comments:

Fermenting On the Cold, but Active Side 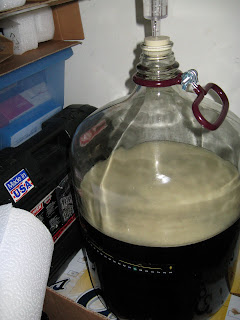 I just checked the status of the brewing beer: It is at 66 F, and I saw a bubble come up through the air lock. I take this to mean that fermentation is active. All is good.
Posted by Travis at 10:08 PM No comments: